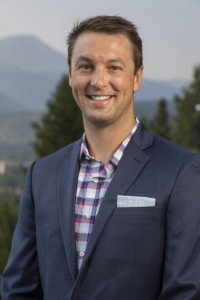 Michael officially joined the Breckenridge Grand Vacations team in 2014 however he has been a part of the BGV family dating back to the early Gold Point and Grand Timber days.  He was born and raised in Breckenridge & attended Summit High School and spent his high school and college summers working as a laborer on the Grand Timber Lodge and Grand Lodge on Peak 7 construction sites.  Throughout his childhood Michael has fond memories of spending time and vacationing with Mike & Rob Millisor and their families.

He earned his undergraduate degree from Miami University (Major: Finance; Minor: International Business) and in 2018 earned his Master of Business Administration (Concentration in Real Estate) from the University of Denver.  Following college in Ohio, he lived in Chicago working as an analyst for AEP Energy and then moved to Shanghai, China where he worked in business operations for the integrated architecture firm, Gensler.

After several years of living in big cities Michael returned home to the mountains in 2014 to begin his career with BGV as a Financial Analyst.  Michael now is the leader of the BGV Analytics Department and is responsible for ensuring the accuracy and efficiency of all BGV reporting and data analysis needs.  He thoroughly enjoys his role supporting all divisions of the business and collaborating with his BGV teammates from the front line, to Results Leadership, and to the Executive Team.

In his free time you will find Michael playing hockey and golf, watching live music, attending sporting events, enjoying the Colorado outdoors with his dog Roofus, and traveling the world with his fiancé Siobhan.  Michael & Siobhan are looking forward to their upcoming wedding in September 2022 and expanding their family soon thereafter.